In a nutshell, yes. But we understand that you’ll probably want a little more detail than that! In our increasingly interconnected world, LED digital displays are invaluable tools for connecting with your customers. A big part of this is to do with one of their core advantages over more traditional forms of printed signage – namely, in that they’re dynamic.

More traditional forms of printed media, such as billboards and banners, involve a lot of additional time and logistics costs. Once you’ve created your campaign, you’ve then got to print your physical signs, distribute them, and install them. LED signage allows you to skip most of that, so that you can create your campaign and artwork, and get it live in front of countless potential customers in half the time. That means it’s often cheaper, easier, and most importantly it allows you to evolve your messaging on the fly, adapting to changing customer trends and demands.

And not surprisingly, it works. One study found that out of a group of small business owners who installed LED signs, nearly 83% of them noticed an increase in sales after installation.

A separate study by Neilson in 2010 found that Digital Out of Home advertising (DOOH) was instrumental in achieving sales boosts of up to 33% for four out of five product brands, compared to other point of sale media. Even more recently, a 2020 Neilson study found that 52% of consumers noticed a digital billboard giving them directions to a business, and 57% of those people then immediately visited the business. 93% of store visitors ended up making a purchase. Those are numbers not to be sniffed at!

So the question then becomes not DOES LED digital signage increase business, but instead: why?

We process visual information from LED signage faster, and retain it for longer

Moving images and vibrant colours physically draw the eye, even when the viewer is actively looking at something else. And that’s for a very simple reason: we’ve evolved to be visual creatures. We won’t go too deeply into genetics, but the bones of it is that those of our ancestors who could see and react fastest to the appearance of predators were the ones who lived longer, passing on their genes.

That probably goes some way to explaining why 90% of the information transmitted to our brains is visual, we process visual images 60,000 times faster than text.

We remember it for longer, too. After just three days, the average consumer can recall about 65% of visually presented information, compared to just 10% or 20% of written / spoken information in the same timeframe. This is backed up by a 2010 study by Arbitron, which found that 47% of people they surveyed said that they remembered seeing a certain ad on a screen. Nearly 20% of those same people went on to make an impulse buy as a direct consequence of the ad.

Neilson have done yet another study in this area too. In 2015, they found that as many as 75% of respondents could recall seeing a digital billboard in the past month, and the consumers themselves said that they felt digital billboards stood out more than online advertising. 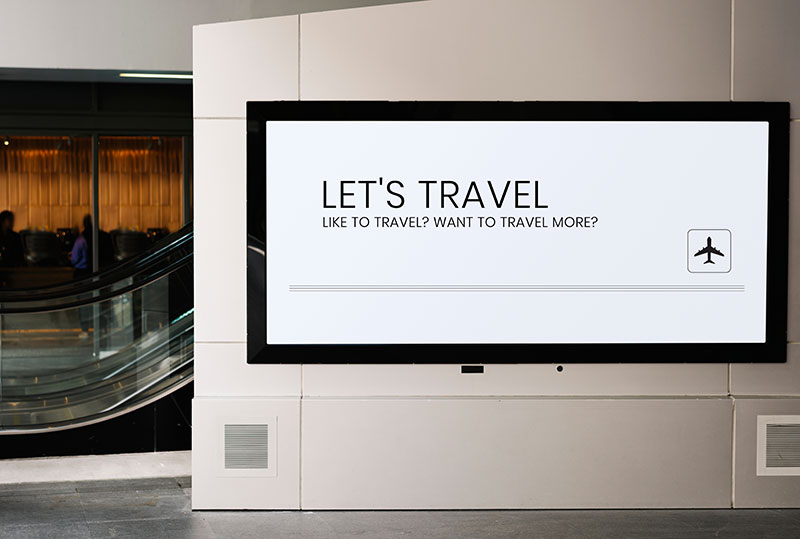 Digital signage engages us on an emotional level

One of the key reasons why customers tend to remember digital signage with such clarity is because it can be effectively used to appeal to them on a much deeper, emotional level. Different environments are typically associated with a range of corresponding moods and feelings, whether customers consciously realise it or not. LED digital displays provide a brilliant way to effectively tap into those feelings, influencing your customer’s mood and perception of their surroundings.

This is supported by research from Garaus et al, who found that “affective digital signage content” – in other words, content that relates to moods, emotions and attitudes – is able to positively influence the emotions of customers, which in turn increases impulse purchases and store loyalty.

It’s also supported by a study by InfoTrends, which found that the installation of digital signage solutions in stores was instrumental encouraging customers to spend up to 30% more time browsing.

It all goes some way to explaining why it’s so important to focus on the creation and style of your content. Well-produced content should evoke tangible feelings from the viewer, whether those are feelings of joy, sadness, eagerness, desire, or even envy. If you’re able to elicit a specific response from your viewer, you’re more likely to successfully convert them into a buyer.

And speaking of which, that’s exactly where we can help here at Scanlite. We know LED digital displays inside out, and all the most effective ways in which it can be used to achieve your goals as a business. If you’d like, you can read a bit more about the basics of LED screens in our most recent post – or alternatively, to find out how we can help you, feel free to give us a call today on 01253 302723, or email us on sales@scanlite.co.uk. We’re here to help!