We’re writing this post in the blazing heat of summer, that beautifully sunny time that annually brings a whole host of seasonal sports to fans all over the world; including major competitions in cricket, tennis, and of course football. (You’ll hardly need reminding about the prestigious UEFA European Football Championship, which came to a dramatic conclusion not two weeks ago!)

Now, besides their timeless popularity and seasonal appeal, these sports also all have another thing in common – in recent years, they’ve all been experiencing some seismic changes due to the introduction of new technology, forever altering the experience for players, spectators and pundits alike. In fact, it’s now universally accepted that the future of sports consumption will be digital.

You don’t need to be an expert to know that LED digital displays have played a major role in that transformation, and they continue to be at the centre of major innovation in the sector. Surprisingly enough, the technology itself isn’t all that new – LED digital displays have actually been around since the 1960s. However, the technology at their core has advanced particularly rapidly over the last few decades, and they’re now a common sight in sports venues of all sizes and standings. So let’s take a quick look back at their history, and how they continue to transform the world of sport today.

As we’ve briefly touched on above, the very first LED advertising displays first made their debut all the way back in the 1960s. It would be a long time before they were ready for widespread use in the sporting world, though. The original Light Emitting Diodes were only available in red, and they weren’t nearly bright or powerful enough to be suitable for outdoor usage.

It wasn’t until the 1970s that yellowish green and amber LEDs would start to be developed. Their power, efficiency and brightness steadily improved through the 1980s and early 1990s, alongside the gradual development of ‘true blue’ and green LEDs. By the late 1990s, LED digital displays were finally starting to see more widespread deployment in sporting stadiums, with their enhanced brightness now complemented by wider viewing angles, and tighter resolutions.

Today, you’d be relatively hard pressed to find any major sporting stadium that doesn’t incorporate LED billboards in some form, and they’re a fairly common sight at smaller and more independent venues too. That’s not really too surprising in itself, considering the many and varied ways in which they can enhance the experience of fans and onlookers, whether they’re watching from right there in the stadium, or somewhere else entirely.

Firstly and perhaps most obviously, LED digital displays can help enrich the experience of all the fans who physically attend a competition, by ensuring that they can constantly stay close to the action no matter where they’re sitting.

Games like football and rugby are often characterised by intense skirmishes focused on a specific area of the pitch. That’s obviously amazing for those right next to that particular spot at that exact moment, but historically the excitement has been somewhat diluted for those too far away to see what’s going on. It’s also particularly useful for broadcasting sports where spectators might get relatively limited exposure to the action even at the best of times, such as the Formula One.

LED digital displays help to ensure that everyone in the stadium can see exactly what’s happening at all times, allowing the entire crowd to enjoy a greater shared experience, as they revel in every moment of excitement, intensity, and exhilaration – together. 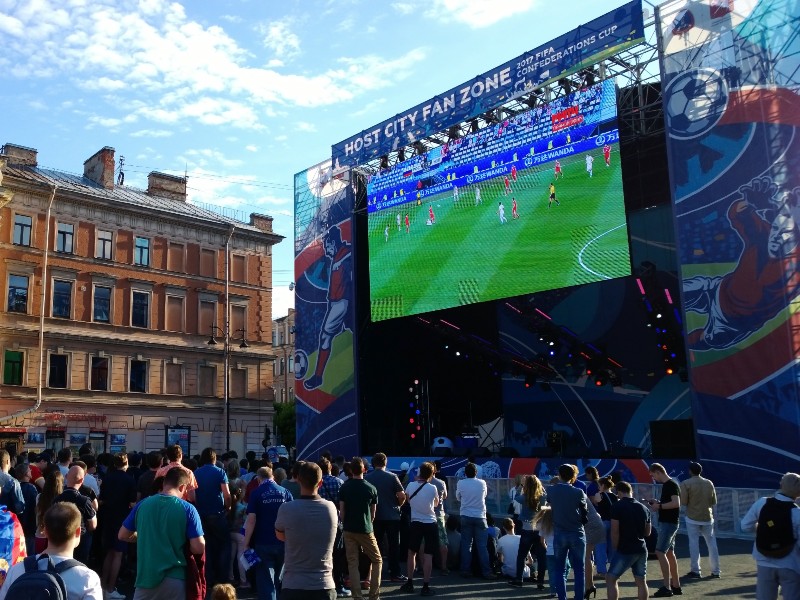 Data has played an increasingly important role in sports worldwide in recent years, providing fresh insight and context to the action, helping sports fans deepen their understanding – and therefore enjoyment – of the action. There are countless fans who take particular pleasure in this aspect of sport, as demonstrated by the enduring popularity of spin-off pursuits like fantasy football.

In previous decades, stadium attendees would miss out on all this data and analysis, which was by and large only available to those watching on TV. Now though, LED digital displays not keep the audience close to the action, but dissect it in real time, with live-action replays, scoreboard charts, stats, and graphics. Fans now have even more time and opportunities to fully appreciate the beautiful angle of a goal, or a masterful overtake, or a one-in-a-million strike – especially if it was too fast to catch the first time around!

Equally, it can help give greater clarity to fans about why certain official decisions have been taken with regard to gameplay – such as demonstrating exactly how a player was offside. In this way, LED digital screens are being increasingly used in tandem with other developing forms of sports tech, such as goal-line technology.

Expanding the reach of sports, and building connection and community between fans

So far, we’ve looked at how LED digital displays have largely been transforming the experience inside stadiums. But they’ve been instrumental in transforming the experience of viewers outside of them too. (For example, they were instrumental in connecting to fans remotely at the height of the Covid-19 crisis, when arenas and stadiums were forced to close their doors entirely.)

In fact outdoor digital screens can be mounted in public spaces to allow anyone to get involved in the excitement of the competition, not just those actually in the stadiums and arenas. The most high-profile examples of these can typically be seen across the UK during global tournaments or events, such as the 2018 World Cup, or the 2012 Olympics, the latter of which were hosted in London.

The most recent example that probably springs to mind is of course the 2020 Euros, which concluded only a few days ago (having been postponed by the Covid-19 pandemic). That was a fantastic demonstration of everything that can be achieved with outdoor digital screens. Not only did they allow long-time football fans to follow the action wherever they were, but they also meant that everyone else could get involved too, even those who wouldn’t normally class themselves as football fans.

Now, it’s worth taking a moment here to remember that for countless people, both here in the UK and beyond, this year’s Euros championship was about more than just football. It was about national unity, and pride, and even escapism, given the challenging year that so many have endured. For many, it was also about community, as watching each game became a communal event in itself, a rallying point for friends, families, neighbours and strangers to gather around as they enjoyed the excitement of the game in one another’s company. (For some, it was the first time in a long while!)

These public LED digital displays played a key role in fostering that sense of community, providing the focal point for countless barbecues, informal meet-ups, and even impromptu street parties. Though England ultimately did not end up winning the championship this year, few will forget the sense of unity the whole country experienced in the run-up to those fateful few penalties. It’s an amazing demonstration of how outdoor digital screens are now helping make sport a truly global experience, more accessible and enjoyable even to those who wouldn’t otherwise follow the competitions.

Even now, this technology continues to develop with new software and new innovations, so it’ll be fascinating to see all the fresh new opportunities it opens up for the world of sport.

If you’re ready to see what it can do for your organisation, you’re in exactly the right place. We know LED digital displays inside out, and all the most effective ways in which it can be used to achieve your objectives. If you’d like, you can read a bit more about types of outdoor LED screens in our most recent post – or alternatively, to find out how we can help you, feel free to give us a call today on 01253 302723, or email us on sales@scanlite.co.uk. We’re here to help!