Video walls and LED advertising displays are now so widespread that it can be easy to forget just how new they are as a technology – and how rapidly that technology has advanced in recent years. Modern video walls are highly sophisticated pieces of equipment which utilise a varied range of hardware and software to display crisp, enticing and exciting imagery to anyone who looks at them. In order to explain a bit more about how they work, we need to examine each of their key components in a little more detail.

The LED or LCD screens

By far the most prominent feature of any video wall is, of course, the digital display boards themselves. Large video walls are typically composed of a group of smaller displays, each showing a piece of a moving or static image to form one cohesive whole. LCD displays used to be the most common type of display by quite some margin, but LED digital displays are now starting to overtake them as the primary choice for a lot of buyers – partially due to their versatile nature, and greater suitability for large-scale and outdoor environments due to a bigger pixel pitch.

LCD and LED advertising screens do have some pretty significant differences, which we’ve explained in more depth in our dedicated post on the topic , so here we’ll just recap them quickly. LED digital signage displays are made up of a huge number of tiny Light Emitting Diodes, which illuminate themselves in sequence to convey an image. LCD screens, on the other hand, are illuminated from behind with a backlight. They use liquid crystal molecules to selectively block the amount of light shining through, which again conveys the image. Both types of visual signage are notably energy-efficient, so they’re relatively cost-effective to run.

The screens themselves are normally fixed to vertical surfaces using wall-mounted brackets. Sometimes, additional methods or functions are used to ensure that they always run smoothly. For example, their power settings might be adjusted to initiate a staggered start, which avoids the danger of power surges when all the screens are activated at once. 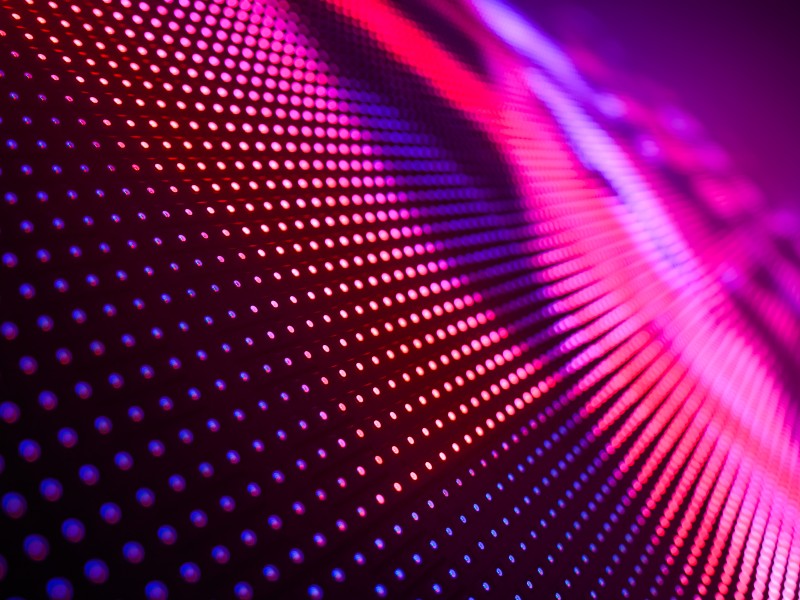 Sometimes referred to as a video wall processor, the video wall controller is the component that regulates each display, essentially uniting them so that they’re all displaying a single, cohesive image across every display. It does this by taking this large image and dividing it into the correct sizes and sections for it to be displayed across multiple layouts. Without a video wall controller, you’d still have active displays, but they would create what’s called a tile effect, with each panel displaying a different image or video.

There are different types of video wall controllers available, some offering their own benefits in the form of extra features and functionality, such as capabilities with refresh rates, edge masking and rotation abilities. If you’ve got a particularly sophisticated video wall controller at your disposal, you may be able to skip out the need to have additional software to process and display your chosen content.

The software plays an integral part in getting your message out to viewers. Essentially, the software is the component that gives you the ability to select the content you want to display. It’s not to be confused with the controller, which only regulates the image so that it’s all cohesive. (That’s why some people prefer to call these controllers ‘video wall processors’ instead, to avoid confusion.)

Software is available in varying degrees of sophistication, but all share the same basic function, helping you to create a user interface from which you can set up and manage your LED digital display screens. Most include basic editing tools, including the ability to set the brightness or contrast, and scaling, trimming or resizing the image. More high-end types of software can also give you access to additional features too, such as allowing you to adjust timings, transitions and labels.

That’s the basics covered! If you’ve got any further questions, or you need anything explained in a little more detail, don’t hesitate to get in touch. We offer an extensive range of digital signage solutions for you to choose from, and serve a wide array of sectors, including hospitality, finance, and health and leisure. We know this technology inside out, and exactly how it can be used to achieve your goals as a business. To find out how we can help you, feel free to give us a call today on 01253 302723, or email us on sales@scanlite.co.uk.