When you’re starting out with looking at digital signage or advertising displays for your organisation, one of the first questions you’ll probably going to end up asking yourself is this – should I choose LCD digital displays, or LED digital signage? It’s one of those universal questions that applies whether you’re focused on digital signage, DOOH, video walls, or even another type of display entirely.

It’s also a question that doesn’t always have a straightforward answer, but you’ll be happy to hear that this is exactly what our experts are here to help with at Scanlite. We know everything there is to know about electronic displays, and how they’re used across a huge range of sectors, including airports, theme parks, restaurants, casinos, stadiums, museums and more.

In recent months, they’ve proven especially valuable for communicating vital safety messages to the public during the Covid-19 pandemic, as well as directing them to key facilities or locations, such as hand sanitising stations or test centres. As things stand, by 2024 the digital signage industry is projected to be worth around 30 billion dollars, which should give you some idea of how valuable it can be to your business.

In short, whatever you’ve got in mind for your own display, we’ll be help you decide exactly what type of digital signage helps you to best convey your message. Before we go through the full details with you though, here’s the basics of what you’ll need to know between LED and LCD screens. Let’s start with LEDs.

What is an LED screen?

An LED screen is typically a large, exceptionally bright screen somewhat comparable to a giant television screen or computer monitor, and made up of countless tiny Light Emitting Diodes. Each LED is an individual light source in the form of a semi-conductor, which means it emits light only when a current flows through it. They don’t require a particularly strong current to function though (which is one of the reasons LED screens are typically so energy efficient).

Each LED is capable of emitting three colours: red, green and blue. These individual colours can be combined and balanced in tandem with each other, to create more complex tones or colours. This, together with the high output capability of LED screens, enables them to convey impactful images that can be seen from quite some distance away.

LED digital displays are typically composed of multiple smaller panels which are then fixed together. This enables them to be customised and scaled down to almost any shape or size, making them an excellent choice for anything from expansive arenas and sports stadiums to smaller trade show exhibits. 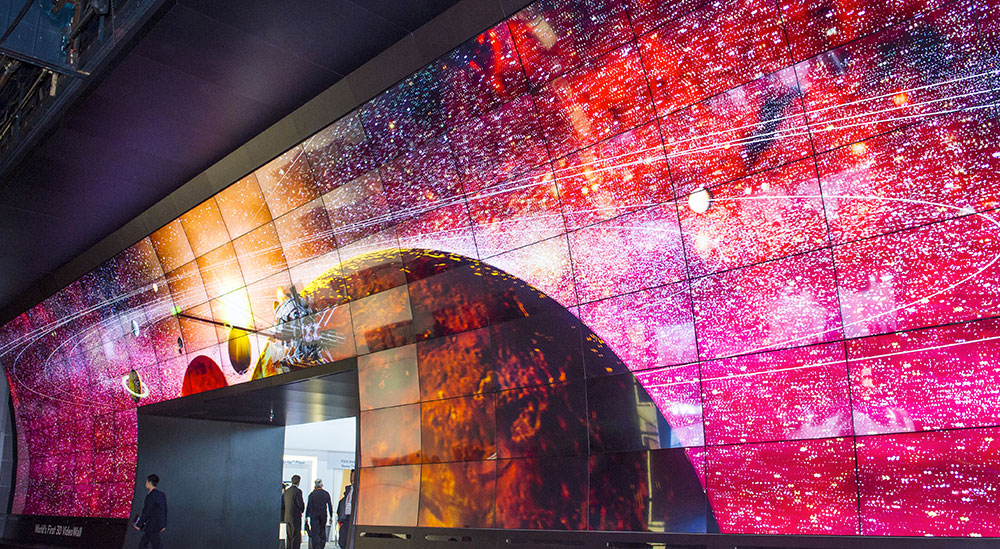 What are the advantages of LED screens?

LED screens possess several key characteristics that make them ideal choices for particularly large scale settings and applications. These include:

The high level of colour and contrast exhibited by LED screens means that there needs to be a moderate level of distance between the screen and the viewer, to maintain optimal picture resolution. They’re therefore best utilised for large-scale, high impact projects to be shown outdoors or to the general public at large, such as big screens on city shopping centres or looking out onto public parks. You can find plenty of examples of these in our case studies here at Scanlite.

OK, so that’s LED signage in a nutshell. Now let’s move on to…

What is an LCD screen?

An LCD screen, or Liquid Crystal Display screen, is a flat panel-display that essentially works on the principle of blocking light rather than emitting it. Basically, an LCD screen functions by shining a backlight through liquid crystal molecules, which selectively block the amount of light that reaches the viewer’s eyes, thereby creating the picture.

This is notably different from the way LED screens work, which is to individually light up each LED to create the picture. Since LCD screens work by blocking light rather than emitting it, they can be even more energy efficient choices than LED screens, given the right circumstances.

LCD screens are typically much smaller than their LED counterparts, and used in more consumer-driven displays, such as computer monitors, televisions, information points, and exhibition stands.

What are the advantages of LCD screens?

LCD screens possess their own distinctive characteristics and advantages compared to LED screens. Here are some of their biggest appeals for buyers:

While LCD screens aren’t quite as bright as their larger LED counterparts, that does mean that they can be viewed from much closer distances. That makes them an excellent choice for indoor events, exhibition stands, reception areas and lobbies, just to name a few examples. In short, if you need a small, affordable and high quality display, an LCD screen might well be just the one for you.

Which one should I choose for my event?

That depends. Some of the main characteristics of your event could provide a rough indication of what type of digital display you should choose, such as whether it takes place indoors or outdoors. For example, here at Scanlite, our hand sanitising displays feature an LCD screen to display Covid-19 information. We knew that people would be close to this display, using the hand sanitiser feature, therefore LCD was necessary. On the other hand, if you’re mounting your display or it is being viewed from further away – always go for LED advertising displays. Scanlite are big advocates of LED but we have displays using both, for different reasons.

We recognise that the decision might not always be straightforward though, and there could be other factors in play that might influence your decision – price, size and location are all just some of the major considerations you’ll have when deciding which digital signage is for you. Whatever the case, our experts are only too happy to help provide any guidance you might need, so you can have complete confidence that your digital displays are an exact match for what you’ve got in mind.